I had an interest in photography for as long as I could remember.  Despite not having any formal education in photography at the start, I always intuitively saw snapshots that I wanted to capture in the world, and the people, places, and moments that were important and beautiful to me.  While I have taken casual photos before with my parents’ cameras, I never had a decent camera of my own to use.  In 2008, my first serious exploration into photography began when I decided to purchase my first camera, a Canon 40D.  It was the older model, but I knew it would be good enough, especially because it was already far over my budget as a co-op student.  In fact, I still remember fondly the $100 memory card that I had to purchase for it, which put the price over the edge, and made it the single most expensive purchase for me ever at that point in life.  Coincidentally, I was publishing the monthly co-op committee newsletters at the time, which gave me a good excuse to really get out there and capture the world.

I roamed the streets of downtown Toronto with my camera and started to blend in with the tourists.  The camera was left mostly in aperture and auto mode since I knew little about all its technical features.  I did not rationally understand what subjects interested me, but I felt that I had a good sense of proportions, space, and colours, and I was happy with the photos!  My fellow co-op friends were happy with them as well.

At around this time, I met Tony from work, who grew up taking a lot of photography.  He praised me on my composition skills, and encouraged me to explore photography further.   I continued to roam the streets of downtown Toronto and began to create more and more photos.  Towards the end of that summer, I woke up to find that one of my photos was featured on BlogTo, a popular website documenting events and news in the city. It was the first time my work was in the spotlight.  It was a great summer. 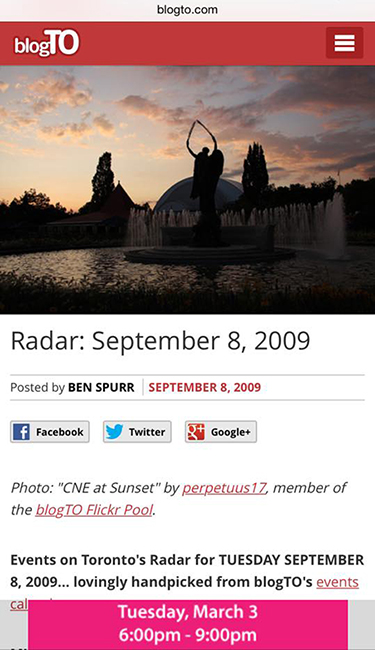